Hi – I’m Jane. I’m registered blind and a guide dog user. I’m a mother of three and an ex Paralympic swimmer. I was also the Community Coordinator for the New Places, New Experiences Project until the end of December 2020.

My story starts about three years ago. Without realising it, whilst bringing up the children, my world had shrunk. My already limited sight had deteriorated to the point that I had no useful remaining vision and my confidence had taken a tumble. My youngest was then 14. We had just moved to a new part of Cardiff, and I was struggling with routes and routines. It was time for me to increase my social circle and try new things. I was delighted to be invited to attend various events and taster sessions. I very much enjoyed meeting new people, reconnecting with familiar faces from the Institute and setting myself new challenges. My confidence began to grow.

During this time, I met another visually impaired lady who had moved to the part of Cardiff where I used to live. She told me how grateful she was to me for making things so easy for her. All the shops and leisure centres in the area were used to me, so they already had a system for supporting her and catering for her guide dog. She found it really refreshing that she didn’t have make any explanations about her sight loss or how they could help her.

Two years ago, I had an experience which brought home to me the truth of her words – and the value of blind participants in leisure activities paving the way for others.

After starting work with Sight Life, my first challenge was to get fit again. I wanted to do this independently of the family – to feel that I was doing it on my own. So, I signed up for the Couch to 5k Programme being offered by a local running club. I first checked with them that they would be able to provide a guide for me, then checked out exactly where I would need to go to meet the club – and how to walk there from the bus stop!

The club could not have been more welcoming. My lack of sight was not an issue for them at all. There were a few practical problems, like finding somewhere to leave my bags whilst I was running (most people had a car to lock things away in!), but everything was surprisingly easy. 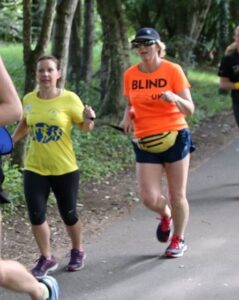 To start with, I would text before each session just to check that someone would be there who could guide me. After a while, they said that there was no need as there always would be. One of the other members, Stuart, was totally blind and had been running with them for many years, so a lot of the club members were used to guiding. Apparently, Stuart had simply arrived one evening and announced, “I want to run”. He was so confident and keen with a great sense of humour that the club just went with it – and they worked it out together. As time went on, and Stuart’s running improved, many members went on official guide running training courses so there would be a pool of sufficiently fit runners to guide him on the marathons and other events he wanted to participate in.

I realised that very few people have Stuart’s confidence – and that many would have less confidence than me to approach the club in the way I did. I also realised how lucky I had been to find a club where Stuart had paved the way for me. Had the reception been less welcoming and “can do”, I would have most likely dropped out of the course long before the 5k!

Big Lottery Fund Cymru is supporting Sight Life’s ‘New Places, New Experiences’ project, which will help thousands of blind and partially sighted people across South Wales to do what I did when I joined the running club. To take part in sport, leisure and interest activities such as tennis, golf and art. The project is so worthwhile and makes such a difference to visually impaired people across Cardiff, assisting them to become involved in community activities available to all and connecting with others with sight loss in the local area.